“Why am I so ugly?” She used to wail at me. I thought a smile would do the trick. That it would make her believe she was beautiful. I was wrong. Today she is yet another teenage suicide according to the newspapers. And me? I’m an empty mirror in an empty bedroom.

These words of a magical speaking mirror need an explanation, they need the expression of a story – a sad story that is a depressing and harrowing bitter truth of our times where superficialities rule the roost and goodness is a rare and unsought virtue.

So without any further preamble let us dive into the story.

Arpita felt a pang of jealousy as she saw the beautiful, smart and vivacious girls talking and flirting with the boys. Her fat form, plain looks, quiet and subdued persona debarred her from the courtship scene. She was always sidelined and overlooked by the boys who bypassed her heavy form as if she was the female version of Mr. India – invisible.

She waddled along and passed the uproariously lively bunch of college students, looking down at the ground and her eyes blurring and becoming fuzzy with unshed tears pricking them. She yearned to be part of this lively bunch of college mates but her looks, tongue-tied nature and frigid manners blocked her entry into their midst. She was doomed to stand on the fringes of that exciting circle and be a passive and dormant onlooker.

She was a studious and sincere student scoring well in her exams. Overall she was a brilliant student with a bright future. She would regularly attend her classes and be studiously up-to-date in all her subjects’ newest information and knowledge. So she was most of her teachers pet. They loved their dedicated studious student. Her parents loved their obedient studious daughter. Her siblings loved their loving and supportive elder sister. But it wasn’t enough for her to love herself. Love herself enough for her self esteem and her self confidence to flourish. She felt unworthy and inadequate.

She couldn’t reconcile herself to gracefully accept her ugly and unsmart persona for which she was unable to attract boys’ attention. She too wanted their fawning attention and their yearning towards her. She too wanted to join the dating game. But it seemed such a distant dream. Which boy would look at fatso and ugly Arpita with not an iota of

smartness or charm? She was such an unlucky girl.

Thus the days passed in a blurred and flurried pace. Arpita studiously slogged and chugged along in her boringly dreary life comprising of only books and studies. She had no other life. No other pursuit or activity ruffled her passive existence. Like a zombie she studiously ploughed her field of studies. Yes so she also excelled in that field. But it was small consolation for what greater happiness she was missing in her dull and dead life. She was sorely missing the vibrancy and charm of a colourful life filled with fun and laughter.

But life did hold a surprise for her. One day, at last, into this this dull and colourless life there did creep in some colour with the entry of a new boy in their college. He was a dashing and handsome dude. To top it he was interesting and intelligent to boot. And he turned out to be a big Casanova – this boy named Rahul. He came and stormed the stage, literally becoming the number one dream boy of most girls. They vied for his

Arpita as usual watched from the sidelines as he worked and warmed his way into the hearts of most girls. It seemed as if they couldn’t get enough of him and his charming and flamboyant ways. Arpita of course knew she would just be a passive onlooker – nothing more and nothing less. She couldn’t be in the line of the fawning and mooning girls, not because she didn’t want to be; but because she knew it was actually of no use. She thought “After the first glance he won’t even throw me a second glance.”

But then something unusual happened. As she was assiduously engaged in her studies Rahul’s roving eyes and mind alighted on her. On and off observing her, he was impressed with her diligence and devotion to studies. He was intelligent but he had no inclination for hard work. He felt she could help him in his studies. Help him in making the endless and boring notes. So he struck a friendship with her. She was enraptured, thinking he felt some attraction for her.

It was only the mere need of the convenience of ready made good notes and a studious mind that would motivate him to draw his wayward mind back to studies when exams drew near – these were the only attractive features that drew him to her. But the unusual thing was the false facade that he presented to her. No boy had been so devious and slippery in gaining such a trivial goal through hook or by crook. A simple goal of being friends for the sake of studies called for a simple enough friendship. Why show the false facade of romantic and sensual attraction?

It was a sinister plan that coldly ignored the repercussions of deep hurt to be felt by Arpita on discovering the harsh truth. But sensitive considerations don’t and can’t penetrate selfish, indifferent and narcissistic mindsets. So Arpita was doomed to be a scapegoat of such insensitive sensibilities and plans. What’s meant to happen does happen. One has no control over others actions; one has only control over one’s own actions and reactions.

Thus initiated by him, Rahul’s and Arpita’s friendship blossomed and flowered with all the right wooing by Rahul and all the right responses by Arpita. As Arpita’s cup of happiness overflowed, she was unaware of the pain and tears of a broken heart that were treacherously awaiting her at the betrayal of her building expectations bolstered by Rahul’s pretense of attraction for her. She never had an inkling of the impending devastation of heartache to be heartlessly flung at her when her help and support were no longer required.

Rahul and Arpita began seeing each other every day and became very close friends. This proximity transgressed to physical closeness that had emotional connotations which were lightly brushed off by Rahul but it was a serious matter for Arpita. By nature women are emotional beings and more so was Arpita because she had been battling with issues of self esteem and self worth which were at an all time low when Rahul came along. But without a slightest thought to her well being he played with her feelings only for his selfish motives.

Rahul ingratiated himself with Arpita and first won over her friendship and then her valuable trust. Actually he thought that slowly but surely by bringing down her defensive walls he was doing her a big favour. She was now no longer confined and constricted in her limitations and weaknesses and she could at least be richer for the experiences and feelings that she gained in her association with him. In lieu of her sharing of her study notes he had condescended to grant this return favour to her.

And then one day Rahul easily and flippantly ditched Arpita. He simply walked away and stopped communicating with her. She was baffled and annoyed at his abrupt silence. But as days turned to months and months to a year, she realized that she had been taken for a ride by a coldly calculative and cunning boy. He hadn’t any guilty qualms of ruthlessly using and then ditching her. A stone-hearted person can’t know and he can’t feel the agony of heartbreak.

When her illusionary dreams came crashing down Arpita felt that her tormenting fear and inferior feeling of her ugliness being an insurmountable curse to her – it was coming true. The mirror became her spirits breaking factor. She thought it reflected the truth of her imperfect self and her imperfect life to her. She felt ugly, imperfect, incomplete, broken and defeated. Her depression was a total blackout.

The mirror’s reflection was a bitter and hard truth but the magical mirror wished to ease her pain and somewhat decrease the sharp stings of the harsh truth that she had to face and accept, as she looked at herself in the mirror. The mirror tried it’s best to console and soothe her aggrieved mind and heart that were disturbed and distraught

with Rahul’s cruel betrayal of her trust in him and their friendship.

How could feelings be so casual and skin deep? How could falseness feel so trustworthy and real? This then was the dead end. This road had led her to nowhere. She had been better off left alone. Yes before she had been lonely but at least there had been no pain. Now she had double trouble. She was again lonely and also in pain. Ignorance had been more of a bliss. And now that she knew more, she felt it just wasn’t worth it. Life itself felt so small and insignificant. It was better to simply end it. 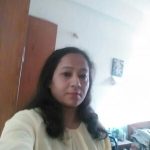 A Masters degree holder in Human Rights (Child Rights and Development) and was working in ICDS (Integrated Child Development Scheme) under Social Welfare Dept., Govt. of Assam but resigned from the job in 2018 due to personal reasons. At the age of 13 years began writing poetry after father's death, more as a therapeutic and cathartic process of healing. Now fully immersed in the passion of writing and establishing a career as a writer.